From time to time, Carshalton's street scene has been enlivened and intrigued by the knitting and crocheting skills of a group of people  who have become known as Wanda's Woolly Coven. They have been delighting the public with their installations for a number of years.
The Queen's Diamond Jubilee - 1 June 2012
​Rows of knitted ducks, in patriotic red, white and blue, mysteriously appeared over Carshalton Ponds in time for the Queens Diamond Jubilee. Thought to be the work of a group of yarn bombers, the soft toys have made a colourful addition to village life! 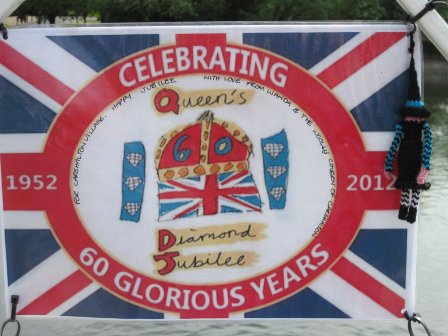 The Olympic Torch Relay - 23 July 2012
On the day that London's 2012 Olympic Torch Relay passed through Carshalton village, there was a larger than life swan installed on the upper pond outside Honeywood Museum - not to be outdone, 'Wanda' appeared also!
Halloween - 26 October 2012
Over the night of 25/26 October the trees in front of Honeywood Museum were hit by the Carshalton yarn bombers. Festooned with knitted spiders in their webs and pumpkins with thoroughly gruesome smiling faces, Halloween has seldom been so splendidly celebrated in Carshalton!! Thought to be the work of a group of yarn bombers, they made a colourful addition to autumn at Honeywood Museum!
The Royal Baby - 24 July 2013
​Honeywood Museum was once again the focus of celebrations by Wanda and the Woolley Coven of Carshalton, this time to celebrate the birth of the third in line to the throne, William, Prince of Cambridge. The Royal Teddy Bears, each in a blue waistcoat, appeared outside Honeywood Museum over-night between 23 and 24 July.

​As on previous occasions, Carshalton’s yarn bombers have made a wonderful contribution to the life of Carshalton village! In due course the Teddies were sold in aid of the Special Baby Care Unit at St. Helier Hospital.
Remembrance Sunday - 9 November 2014
​Pictures taken before and after the actual ceremony show the crowds attending and the uniformed groups arriving. After the parade had marched off, across the ponds and up the High Street, we see the Woolly Coven's remarkable addition to the day - a sea of knitted poppies (one for each of Carshalton's remembered); an extremely moving and most thoughtful installation.

Some of these poppies were made available in the Museum Shop in return for a minimum donation of £2.50, the entire proceeds going towards supporting the Royal British Legion. 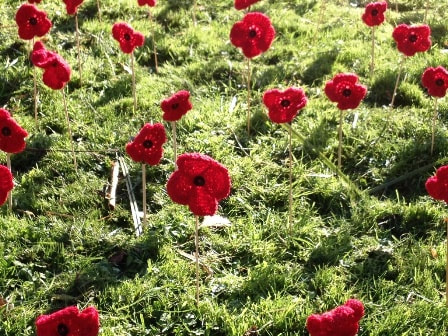 During Lockdown 2021
​Pictured the morning after Twelfth Night, Carshalton’s yarn bombers made a surprise return, cheering us up during a time of lockdown resulting from the Coronavirus pandemic. Seen on the pillar box outside the Post Office in Carshalton.
This pillar box then celebrated Valentine's Day, and on then, on 22 February, was seen sporting a distinctly spring-like decoration! As restrictions eased, Doctor Who paid a visit in September 2021
Carshalton Open Streets 2021
Images arriving in September 2021.
Pictures Copyright © The Friends of Honeywood Museum and variously Jane Howard, Steve Morris, Elizabeth Price, Sarah Price and Paul Williams.