The garden is separated from Pound Street by a high brick wall. The section to the east, or Ponds side of the gate, was rebuilt in 2019. Before this the wall was divided into three sections by bonding breaks. The central section - which includes the Pound Street gate - was originally the south wall of a building which was part of the original Honeywood demolished about 1884. It has a length of 7m. The bonding break on the west side of this does not extend into the lower part of the wall. This suggests that the lower part of the western section of the wall was contemporary with the building and that the wall height was raised at some point. The bricks in the central and the lower part of the western sections have a thickness of about 60-63mm which would be consistent with a date of around 1700 or a little later. The bonding break which existed to the east side of the central section extended to within a few courses of ground level.
The brick courses respect the upward slope of the road rather than the flatter surface of the garden.

The Pound Street gate appears to be a fairly recent insertion into the wall as it has a concrete lintel. It seems to have been used as an entrance when, pre-1990, some rooms in the house were used as caretaker’s accommodation. This explains the letter box in the gate. 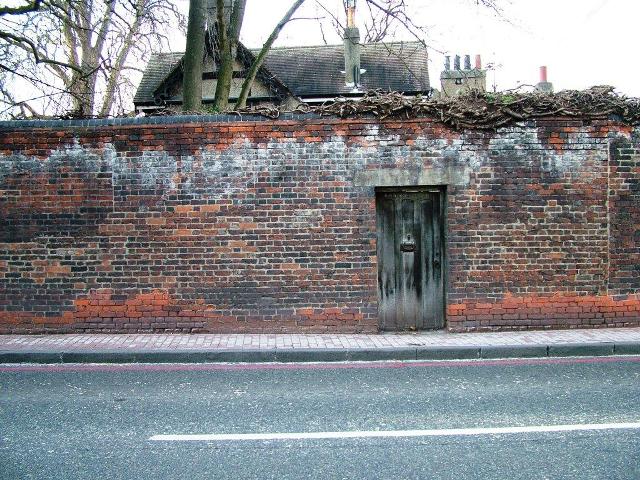 There are three lime trees and an ash tree close to the south boundary wall which are not shown on an air-photo taken in 1921.
The shrubs in the bed by the boundary wall were planted about 1990. We do not know anything about the Victorian or Edwardian planting in this area.
In the next page we look at