The back garden at Honeywood

In the mid-19th century there were two houses at the western end of Carshalton Ponds. One, on the south side nearest the Greyhound and Pound Street, was known as Honeywood while the one to the north was called Wandle Cottage. In 1878 a businessman called John Pattinson Kirk and his wife Leah rented Wandle Cottage. In 1883 they bought the freehold of both houses. They soon demolished the original Honeywood and they transferred the name to the surviving building.

Kirk worked for - and was later a partner - in a major photographic manufacturer and retail called Marion and Co. When he bought Honeywood he gave his address as 23 Soho Square, London. This was Marion and Co’s shop so he and Leah probably lived in a flat above it and they may have acquired Honeywood as an out-of-town house, but if so, it soon became their main home.

The demolition of the first Honeywood allowed the gardens two houses to be brought together. Some of the surviving features in the garden predate this merger and some were added later, although the exact sequence of development is often unclear.

In 1902 a large extension was added to the south end of the house. This included a billiards room and a drawing room - the latter with French windows opening to the garden also a little window seat above the stream which flows under the house.

By the 1920s most of the raised beds along the edge of the garden had become heavily shaded by trees on the land behind the house and the plant beds had been moved into what is now the lawn.
​
In 1939 John and Leah’s adopted daughter Lily sold Honeywood to Carshalton Council. They used it as offices and let some of the rooms for functions. The garden gradually decayed and by the time the Heritage Service took it over in the 1990s the original planting had gone and the structures were in ruins.
A detailed examination of the history of the back garden, as it is currently understood, may be found from the link below.

The garden is now arranged around a central lawn and many of the features are hidden in the snowberry and other vegetation around the edges.
​
A stream enters the back of the garden, flows across the end of a rectangular pond and through a culvert under the lawn. It then emerges briefly behind the house and then flows under it and into Upper Pond. In the past the culvert would have flowed all the time but the water table dropped in the 20th century and it now only appears intermittently after wet winters. In the Edwardian period it fed two other small ponds one of which has survived. 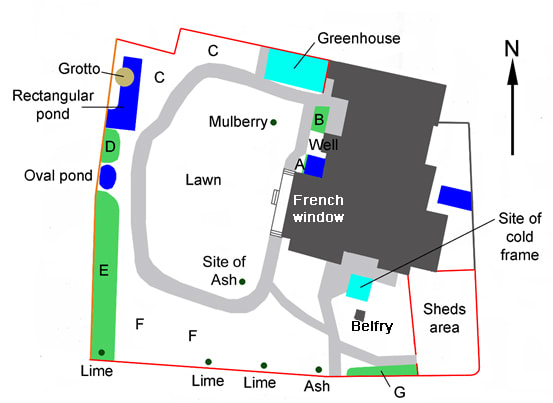 Plan of the garden showing the location of key features. The plant beds are lettered A-G. Those in green have a burr brick edge or other structure. Beds C and F are bounded by the paths and walls
Explore the historical features of the back garden from the links below.